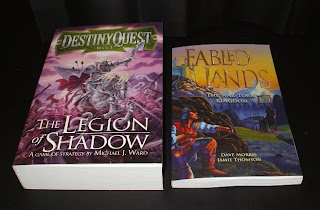 A nice package arrived today from Amazon (okay, it didn't arrive today, I took a three day old parcel note down to the local Royal Mail depot where they make you wait whilst they send in some guy with papercuts on his fingers into a mountain of cardboard all branded with small address text and large barcodes)  But hurrah, inside this packet I beheld such wonders!

Both new books are solo-gamebooks, but unlike the few I hoard they are shiny and new.  They are DestinyQuest: The Legion of Shadow by Michael J. Ward (author page) and Fabled Lands: The War-Torn Kingdom by Dave Morris (bibliography) and Jamie Thompson (bibliography).

I'm slowly facing up to the fact that my review posts are the equivalent Jar-Jar Binks shouting "Gooba Fish!" at every pretty product which passes by.  And why not? *Grin*  If you want a really in depth exploration of the Fabled Lands series Lloyd of Gamebooks is running a fine-tooth comb across it's history, game mechanics and implications for gamebook writing here.

DestinyQuest is a completely new one on me, and it's the aforementioned Lloyd who is to blame for my purchase.  It has it's own website and everything. ;)  I've had a very quick look through both books and I'm adoring the line-art (but people know I'm a sucker for black and white line art) 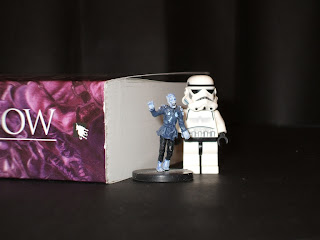 But more importantly, DestinyQuest is HUGE.  Let's not talk section numbers or page count.  Heck, I'm not even going to measure it's thickness with a ruler. I shall use comparisons that only the right people out of us truly relate to.

DestinyQuest: The Legion of Shadow when lain flat is taller than a DnD Chillborn Zombie Mini and just shorter than a Star Wars Lego Stormtrooper.  Get the idea? - I mean that's like one of those huge airport novels that people read on the beach - fatter than a core rulebook of numerous systems (which is what I take to the beach).

I think I remember that the Fabled Lands used to be in a fairly large format, many years past.  The recent publications are smaller but are still larger than an old Fighting Fantasy gamebook. 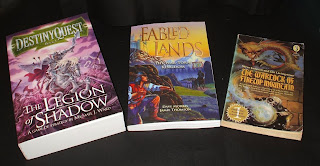 Just look at that monster on the left.  I've no idea at the moment about the quality of the game contained therein, but LOOK AT THE SIZE!  That's one fat solo-game - I'm saying goodbye to sleep in 2011. :)