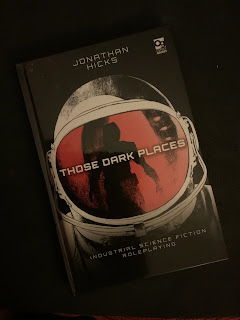 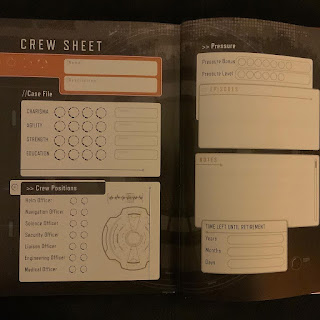 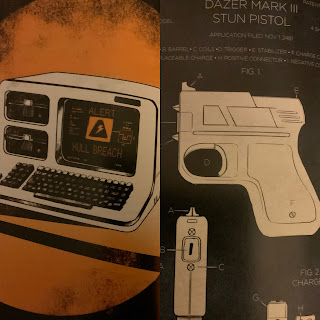 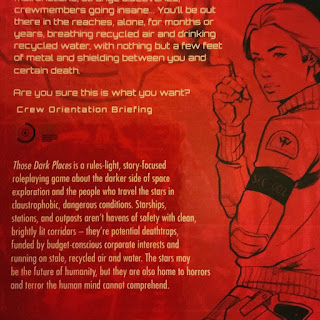 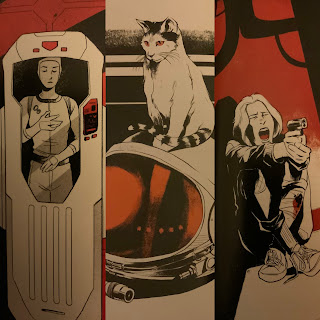 If you enjoy the fact that the door keyboard isn't responding, the bulkhead lights are flickering out, the air tastes bad, the company-loyal synthetic automaton is the only one on the bridge, and that the strange passenger from Sleep Pod 7 is running amok naked, prising open magnetic cargo crates with a broken multitool ... then Those Dark Places  by Jonathan Hicks is probably for you.  This is a gritty "industrial sci-fi" RPG where players need to keep their characters' stress levels down, doing a job they might only be half qualified for, in a claustrophobic starship, in the arse-end of space, with jump scares, mishaps and environments which just want to kill them.  This is definitely a "mood piece" with a very accessible pick up and play system.  Downbeat 70's/80's movies are cited like Outland and Alien as inspiration.  The technology is physical, mechanical: tightened levers, illuminated switches on panels, interiors are about function over comfort.  Refreshingly, the setting is broad enough for a referee to create their own campaign with plausible locations for grizzled archetypal company-paid characters to be challenged in.  Space stations are like oil rigs in space etc.  The employer's profit is king.  As opposed to the Alien RPG, there's no pressure here to eventually encounter a bio-hazard organism or xenomorph, but as a dark thriller themed game the option is always there - and the players really will not know what to expect.  There's some lovely illustrations by Nathan Anderson, of clunky computers, space helmets and on-edge characters by steaming pipes, but no actual deck plans.  To be honest, plans, sci-fi art and film set photos are a dime a dozen with a Google Search by an enterprising referee, so no problem there.  The simple one six sided die based system means that it might adapt easily to online play - the publisher's facebook page features that games shared on Twitch.  The rules are appropriate for both long term campaign play (across many sessions) and one-shot "do the job" / solve the problem / "try to survive" games.  As a collector of TTRPG rulebooks, I end up often reading a lot more than actually playing, and the in-character prose here doesn't disappoint (although it can get confusing when they are describing "simulations" as though the RPG itself was something in the reality of game world, like a type of holo-deck, meta-meta).  It's definitely worth a look - it's a complete game in one, very easy on the eye, compact book.

Those Dark Places, Jonathan Hicks, Osprey Games.  This plush colour hard copy is from ospreygames.co.uk . The PDF is on DriveThruRPG too.